So as my over two month slow carb lifestyle seems to be indicating, 2011 is the year that I am trying to reinvent myself a bit. So far so good. Of course today is my binge day, and I started it off right. With some leftover supplies from the aforementioned pancake Tuesday, we decided that we would have a large brunch at the office. And large it was. It was pancakes, french toast (both savoury and sweet), bacon, sausage, fried eggs, danishes, toast and beans. It was exactly what I needed. It was fantastic. It has also been a very nice day weather-wise today. We ate out on the balcony and at one point I had to move into the shade as I was overheating. Not a bad problem to have in March if I do say so myself. So after brunch, inspired by the post laser tag swim we had a couple weeks ago, I decided it was warm enough to go for a swim. So I went home changed into swim trunks and headed up to Admiralty House Park which is about a minute from my place. As a side note, swimming trunks are something else I need to get in a smaller size now. I walked down to the dock and dove in. I managed a couple of lengths of the inlet before I had to slow down and tread water for a bit. I was joined at one point by a group of Russian speaking gentlemen who spent some time diving in while I was swimming lengths. I managed four round-trips between the dock and the opposite cliff wall before I decided that I’d probably had enough, particularly if I’m to play boardgames tonight. While I am in generally much better shape than ever before, swimming is a special beast and it will take a bit to get back into that kind of shape. I do plan to keep it up though, and while it might remain to be a weekend activity for now, I’d love to start going in the morning before work if I can. Will need the mornings to warm up a bit first. And while I was only in the water for maybe 20 minutes, it feels like I spent 3 or 4 times that long in the gym. Which is the point I guess. I’ll also try to get a good photo of this area I’m swimming in so people can visualize it better. In the mean time, I found a decent photo on Flickr. Just imagine it being a lot more blue sky and a lot fewer people in kayaks. :) 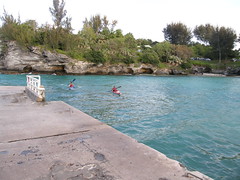